During the very first days of year 2013 the cart path to the Niihama DX cabin was covered by wet white layer. Even so thanks to the hard-working use of reverse gear and snow shovel I reached the beverage yard, after a while. So I missed the targeted 22 UTC id´s, but after that conditions was noticed to be remarkable worse than yesterday (and much more worse than next evening). Some NA with some YV-stations. TA stations got through all night long, but signals used to be quite “snotty”, particularly during first hours.

Interesting Latin rhythms was noted on 920 kHz and just on the fading top at 0032 UTC a nice promo was announced for a festival held on January 6th, “…transmite vivo en 920 AM, la radio pública de Paraguay!”. This was the first time I have noted Paraguay on MW and is also FFN (first from Niihama dx cabin). I quickly scanned through other PRG-frequencies: Some prospective signals was noted, but no track or too weak. Only 1480 was a little bit stronger, but later it appeared to be Fajardo PR. Also have to consider that Radio Nacional de Paraguay on 920 kHz has a 100 kW power transmitter.

Otherwise the night was almost lousy although there were all the time plenty of transatlantic 10-spikes on my Perseus dial. But even most dominant frequencies like 1130, 1140 and 1300 appeared noisy and mostly hardly readable. Mixed cx gave me regular ID´s like R Reloj 1020, Notiuno 1280, WOOD MI 1300, 1310News.com, AM radio 1430 and R Vibración 1470. All these observations are based on live listening: Trawl recordings are still totally unexamined. But towards morning hours cx still weakened and noise level increased. Often so generous dawn effect wasn´t noted at all.


248° beverage for Spain and England only?

The nice Paraguayan signal was offered only by 277° (830 m), not by 248° beverage (430 m). Longer wire gives more gain. It´s also remarkable that on the lower MW band the pattern of a beverage beams dozens of degrees aside from the beverage direction itself. And the wire line in the forest naturally isn´t straight, either horizontally or vertically. Real features of an antenna are always case by case, and vary by frequency too. In practice the pattern is significantly different to the theoretical one. For some reason 248° beverage works well with Spanish stations, i.e. stations from directions 220-240°, but nobody has never reported that 248° would beat the old faithful 277° with any Latin American stations. I suppose Radio Nacional from Asunción (250°, 12 000 km) is now the southernmost station in this comparison: Most interesting will be when somebody  first time can compare 248° and 277° beverages with stations from Brazilian east coast, Uruguay or Buenos Aires area (238-245°). And what about UK: According to my minor practice at least some stations from England (mostly 240-255°) were favored by 248° wire? 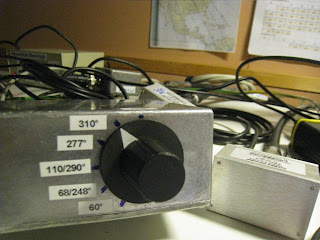 DX cabins antenna arsenal contains nowadays 4 beverages to the Americas: mentioned 248° and 277°, and also 290° (400 m) and 310° (450 m). All antennas are fed with quality coaxial. All baluns, connectors and groundings are carefully matched and measured by club members’ technical team led by JPF and MDK. But for some unidentified reason the 290° wire has never been number one in my empiric comparisons. Could this have something to do with its´ reversible feature (by switch 110° or 290°)?

Anyway I have always found 277° wire catching best CA and SA signals. And 310° is the one and only with NA. In the interface there is naturally some case by case variation. For instance with Newfoundland (290°) and Cuba (287-295°) stations the best antenna varies: Sometimes 277° gives the strongest and most readable signal, sometimes it´s far too noisy. In general the base noise level of 277° aerial is much higher on the Perseus scale, and very notable also in the head phones. Major source for this is unknown: Perhaps there are some remarkable antenna individual reasons, but maybe even the proximity of the city centre of Tampere affects: extensive urban area just 5 km straight ahead in the pattern beam? Contrarily 310° beam is directed to the lake and on the first 12 km there is only water or sparsely populated shores on the line.